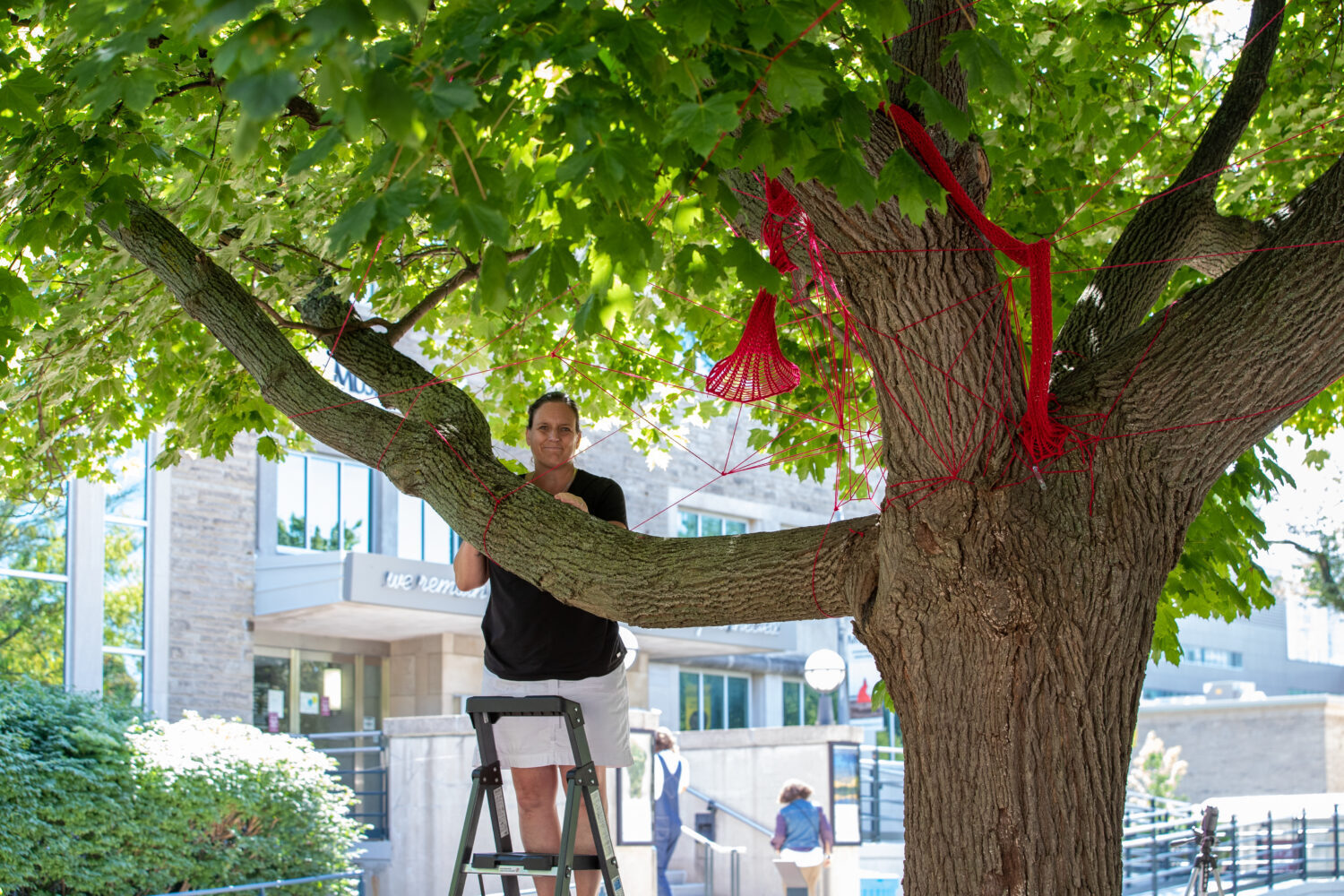 Local Métis artist Tracey-Mae Chambers has brought hope and healing to the McMaster Museum of Art with a site-specific art piece installed in the museum’s garden.

The installation is part of Chambers’ #HopeAndHealingCanada project, which contemplates themes of connection, reflection, and healing in the wake of the COVID-19, and the daily news of unrest around the world. In recognizing the need to reconnect, #HopeAndHealingCanada creates space for people to pause and reflect and heal towards a more hopeful and brighter future.

Using vibrant red string, Chambers’ creates detailed installations by weaving and intertwining the string among elements of the environment outside of sites across the country such as museums, parks, and city halls. Chambers’ says red is chosen because it is “the colour of blood, the colour of passion and of anger. It is the colour of the slur against Indigenous and represents danger and power. It can also represent courage and love.”

The process is painstaking and organic — Chambers creates the intricate web without knowing the result, instead building and adapting the installation based on her surroundings. This approach itself is a form of healing as she is able to connect with both the environment and the community during the process of creating. According to Chambers, “The challenge of an unknown environment to build in is part of the point. I must adapt. We all must.”

The installations are mostly temporary in nature, often created, photographed, and then taken down in the same day. Chambers says, “I want to illustrate the temporary nature of our lives, of our struggles and our achievements. The string represents the connectivity between each other and our environment.”

To date, over 15 installations have been created including in Gage Park, the Dundas Museum and Archives, Grimsby Public Art Gallery, Niagara Pumphouse, Bayfront Park, Gallery Stratford and more. Each time the string is removed and re-used for the next project, both in an effort to limit waste while also connecting the sites together through material.

Built over the course of two days, Chambers’ installation at the McMaster Museum of Art uses over 4500 metres of string, connecting several trees and creating a canopy above. The installation will be up throughout the fall (weather permitting), so students, staff, and faculty on McMaster campus have a chance to engage with and contemplate the work. We encourage you to come by, snap a photo and tag it with #HopeAndHealingCanada.

Tracey-Mae Chambers is a Métis sculptor and installation artist based in Simcoe, Ontario. Committed to art as a vehicle for social change, her work has been featured in solo and group exhibitions in Canada, the United States, and Europe. Her work is also included in numerous public and private art collections. Chambers has been awarded several artist residencies, including Artscape’s Gibraltar Island Residency.

In 2017, Chambers was commissioned by the United Nations to create six sculptures for the U.N. Environmental Awards celebrating 30 years since the Montreal Protocol was initiated. Her work has also been the subject of feature articles and interviews by CBC News and CBC Radio.