Here are a few entries from the past. Search or Sort the archive to view all entries. 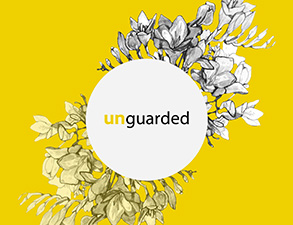 The McMaster Museum of Art is pleased to present the graduation exhibition of the McMaster BFA Class of 2020:

Over the past four years, this class of 16 individuals has come together to learn, create, and understand one another in both artistic and personal settings. They have supported each other as they delve into new directions in their respective practices, across a wide range of media from clay and paint to digital and sound art. Throughout, they have worked collaboratively to develop and curate exhibitions, notably the ambitious 2018 spring fashion show, Renovate My Body.

This exhibition presents the work of these emerging artists, artist talks and more and celebrates a major milestone. 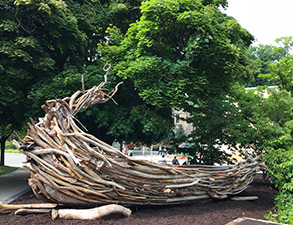 Ernest Daetwyler
The Boat Project/everythingwillbefine
Artist Garden  | 2018 – 2020
Canadian artist Ernest Daetwyler will build a site-specific work in the Museum’s Artist Garden this summer. He will transform pieces of driftwood into a boat form, embedded with a steelcut text message, creating an environment for both active engagement and reflection.  The surreal and poetic installation is intended to symbolize a time of change, challenges, and the existential fluctuations that life can present.

Find out more info, watch the Artist's Talk and see photos of the installation in progress: here 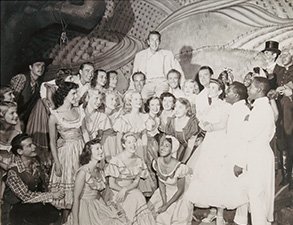 More information, videos, and a virtual curators tour of the exhibition are posted here

Deanna Bowen’s solo exhibition presents still and moving images following ongoing research into the artist’s family lineage in Canada. Bowen’s practice concerns itself with histories of Black experience in Canada and the US that remain below the threshold of visibility, not because they are impossible to see but because they are difficult for the majority of culture to acknowledge. Mining overlooked archives, forgotten documents, and related ephemera, Bowen employs a range of artistic gestures to bring traces of a complex, deeply personal and often violent past into public visibility. The exhibition takes up many of the concerns currently shaping discussions in photography and Black visual studies. 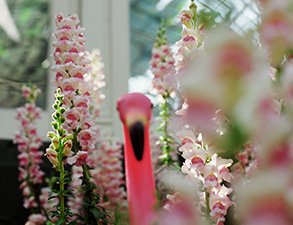 The relationships between human and nonhuman animals have always been at the heart of our existence. Notions of human superiority, reinforced in the age of enlightenment, have played a fundamental role in where we find ourselves in the 21st century: deep in the human-created catastrophe of the Anthropocene.

Animals Across Discipline, Time & Space brings together work by five artists who explore the nonhuman. The exhibition includes sculptural installations inside and outside of the museum by Mary Anne Barkhouse (Nimpkish tribe, Kwakiutl Nation), the interactive Urban Wild Coyote Project installation by Kathryn Eddy (American), large scale drawings by Erica Gajewski (Canadian), a film installation by Hamilton-based artist Derek Jenkins (American) and selected photographs by Colleen Plumb (American) from her series Animals Are Outside Today.

Image: Colleen Plumb Flamingo, photograph from the series Animals Are Outside Today 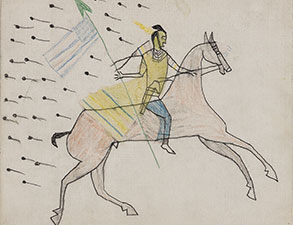 Curated by Rhéanne Chartrand and Gerald McMaster
Supported by the Terra Foundation for American Art. 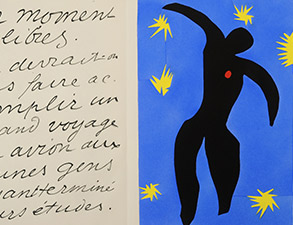 The Levy Collection
it is from here that the world unfolds
Aug
24
Dec
14
2019
CURATORS:
Pamela Edmonds

it is from here that the world unfolds
Curated by Pamela Edmonds
August 24 - December 14, 2019

A reconsideration of the Herman H. Levy Collection and Bequest spanning five centuries of historical, modern and contemporary art focused primarily on the European canon. Instead of constructing a linear historical survey, individual works and groupings provide points of departure for alternative narratives reflecting transcultural exchange and re-orientations. Presented in recognition of the Levy Collection’s return to McMaster following its cross-Canada tour in the exhibition, A Cultivating Journey highlighting significant artworks donated by the Hamilton businessman and philanthropist in 1984.
More Information. 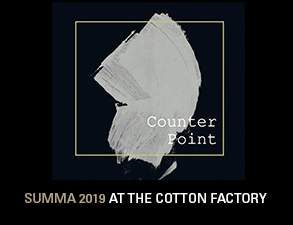 Following the reception, open hours are April 8 - 12 and April 16 - 17 from 11 am – 3 pm
Since entering the McMaster Studio Art program in 2015, our class has developed and grown both as individuals and as a group. As our time here at McMaster comes to an end, we have the pleasure of presenting our work to the public in a final exhibition. This show is titled Counterpoint, which means, “to combine elements”. With the elements of our practices merging and influencing one another, Counterpoint is a commemoration of experiences and artistic endeavours.

*McMaster Museum of Art has hosted the Studio Art Graduation exhibition for more than 30 years, but had to close from March 19 – August 23, 2019 for Environmental Systems Upgrades full details. We are pleased that an alternate location has been found for 2019, and look forward to future SUMMA presentations. 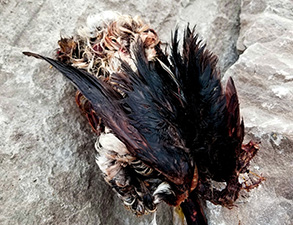 The Artist would like to acknowledge the support provided
through the City Enrichment Fund. 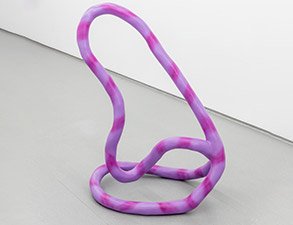 Jaime Angelopoulos is a Toronto based artist who has exhibited widely with recent solo exhibitions at the MacLaren Art Centre (Ontario), Judith Norman & Alix Art Gallery (Ontario), Parisian Laundry (Montreal), MKG 127 (Toronto), and Musée Regional de Rimouski (Quebec). She received her MFA from York University and studied sculpture at Meadows School of the Arts (Dallas, TX). She was awarded the inaugural Hazelton Sculpture Prize in 2013 and has participated in numerous artist residencies including KulttuuriKauppila Art Centre (Finland). Her work can be found in numerous collections in Canada and internationally. 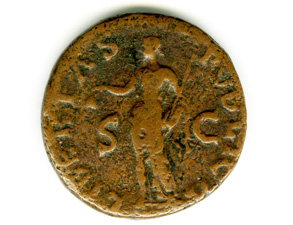 This is an exhibition of twenty-two coins, mostly from the Roman Republic, dating back to Alexander the Great. They are significant for both their value to McMaster's Teaching Collection and their provenance. The Collection was generously gifted to McMaster University by McMaster astronomy professor Ethan Vishniac, who inherited it from his grandfather, renowned photographer Roman Vishniac. 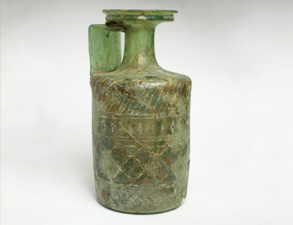 Domestic Vessels from the Greek and Roman World
Ongoing (Closing temporarily March 9 - August 23 during Facility shutdown)
This new antiquities exhibition presents a picture of daily domestic life in the ancient world through objects familiar to Greek and Roman households. All vessels are drawn from McMaster Museum of Art's permanent collection. 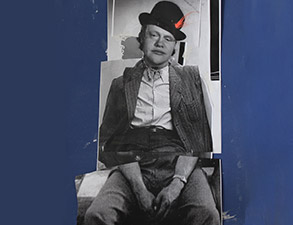 *  *  *  *  *
The 68 works presented in Angela Grossmann’s Troublemakers address the role that performance plays in the transgression of gender and social expectation, the stigma of the unruly body and the disciplinary power of shame.

Throughout her career Grossmann has sought to re-create and re-dress the marginalized, the misunderstood and dispossessed with her strongly “feminist” dynamic mixed media works that intervene in both the physical form and visual experience of subjectivity. Troublemakers continues with this project exploring concepts relating to the “wanting to be” and “not wanting to be” of identity.

The re-make is at the heart of her undertaking. From her large found photo archives, which include vintage mug-shots (retrieved from the trash at the closure of the BC Penitentiary), risqué images of women posing in cheap motel rooms, sentimental portraits of children, tweens and toughs, her interventions strategically alter their meaning or potential meaning by dislocating them from their “normal” or expected context. Through the snip of her scissors, the deconstruction and reconstruction of body parts, the addition of doll’s clothes, feathers and felt hats, Grossmann blurs the borders between the unconscious and the purposeful and the finished and the unfinished. Certainly the most prominent, most creative and unspoken attraction in Grossmann’s work is her exceptional ability to create believable characters triumphant in their troublemaking. Her passionate provocations imply the possibility of other subject positions and with them the possibilities that the edicts of power are capable of being resisted, rewritten, and even reversed.

Angela Grossmann is a Vancouver-based visual artist. Over the last two decades her paintings and collages have been the subject of more than 20 solo shows in Canada, the U.S.  Europe and Japan beginning with the Young Romantics Exhibition at the Vancouver Art Gallery (1985). The Art Newspaper (June 2006) included Grossmann on a list of 100 artists who have most influenced students at art schools in Britain (culled from 11 leading British art schools). Recently her work has been featured in three Vancouver Art Gallery exhibitions including Unreal that showcased her miniature surrealist paintings. A series of her collages were featured in a solo booth at ArtToronto 2015.

Alongside her solo career Grossmann continues collaborations with the Futura Bold collective, its members including: Attila Richard Lukacs, Graham Gillmore and Douglas Coupland - to date the group have launched six major self-initiated projects.